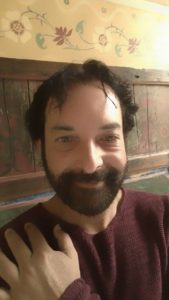 Destination, Fort Stevens! My last camping and hiking spot in Oregon before crossing over to Washington, was a relatively short drive away from Portland. I was looking forward to camping and hiking on the Oregon shores for a couple of days. I had not been camping nor hiking since I had left Point Reyes four days earlier. On that Sunday morning, the sun was out and it was a beautiful day for hiking. The weather forecast for the next few days was perfect! However, the tiny itchy spot on my eyelid had now swollen and it was making it difficult for me to drive, as my left eye was half shut. Before looking for medical help I had to check-in and set up my tent. Being that it was a Sunday, I had to look for a clinic or go to the emergency room.

I arrived at Fort Stevens around two in the afternoon. After setting up the tent I drove to the town of Astoria hoping to find a clinic, but because of being Sunday all I could find was a sympathetic pharmacist who told me not to go to the emergency room. She advised me to wait another day or so because she said that the center of the boil was about to pop! Returning from Astoria, I found the campsite invaded by an army of mosquitoes. The firewood supply man drove by and I made sure I would have plenty to burn to keep the insects away! I even sprayed the outer tent with repellent to try and keep them away.

After make preparations for the evening, I hiked to the beach to watch the sunset. The wind brought ashore a cold breeze. It was, in fact, quite cold! However, despite the cold the crowd was growing rapidly. They came prepared! Most of the sunset watchers brought blankets and were dressed for cold weather. A photo shooting that had been taking place by the Peter Iredale wreckage was reaching its climax. A few photographers were setting up their equipment at strategic locations on the beach and on the dunes.

Fort Stevens was in operation for 84 years, from the Civil War to World War II. Today, this historic landmark in the Northwest offers camping, beach combing, fresh water and lake swimming, hiking trails, wildlife viewing, a historic shipwreck, and a historic military fort. Fort Stevens is unique and diverse. It’s unique because it is the only Civil War era earthen fort in the West Coast. It also has many early twentieth century concrete artillery gun batteries; including a rare battery that served as a command center during World War II. The park, which today has a network of 9 miles of bicycle trails and 6 miles of hiking trails in a diverse habitat of spruce and hemlock forests, wetlands, dunes, and shore pine areas, was named after Union Army Major General Isaac I Stevens. Major General Stevens was the first territorial governor of Washington, who died in 1862 at the Battle of Chantilly.

The original earthen fort was completed in 1865 to protect the mouth of the Columbia River from a possible British Army invasion from the north and from confederate gun boats from the south during the Civil War. A possible English invasion from Canada, in case the British joined the Confederate side during the Civil War, was seen as an eminent threat and Fort Stevens was an imposing line of defense. The fort became the only coastal defense during the Spanish-American War, World War I, and World War II. It also gained the distinction of being the only American military installation to have been attacked during time of war since the war of 1812, when on June 21, 1942 it was attacked by a Japanese submarine.

Slowly decaying and disappearing, the wreckage of Peter Iredale sits as a monument grounded on the beach creating a great background for photographers and sunset watchers. Having ran ashore on October 25, 1906, she was 285 feet long, four-masted steel bark sailing vessel. The Peter Iredale was built in Maryport, England, in 1890 and owned by British shipping firm Iredale & Porter. On September 26, 1906, the Iredale left Salina Cruz, Mexico, bound for Portland, where it was to pick up a cargo of wheat for the United Kingdom. Despite encountering heavy fog, they managed to safely reach the mouth of the Columbia River early in the morning of October 25. The captain of the ship, H. Lawrence, later recalled that, as they waited for a pilot, “a heavy southeast wind blew and a strong current prevailed. Before the vessel could be veered around, she was in the breakers and all efforts to keep her off were unavailing.” The Iredale ran aground at Clatsop Beach, hitting so hard that three of her masts snapped from the impact. Fortunately, none of the crew were seriously injured. Captain Lawrence ordered that the ship be abandoned, and rockets were launched to signal for help.

The lifesaving station at Point Adams quickly responded, sending a team of men to rescue the crew. It was a dangerous task, but the lifesavers managed to bring all twenty-seven crewmen, including two stowaways, safely to shore. William K. Inman, one of the lifesavers who helped Captain Lawrence ashore, remembered that the red-bearded captain stood stiffly at attention, saluted his ship, and said “May God bless you and may your bones bleach in these sands.” He then turned and addressed his men with a bottle of whisky in his hand. “Boys,” he said, “have a drink.” The British Naval Court later ruled that the sudden wind shift and the strong current were responsible for the stranding of the ship, and that the captain and his officers were “in no wise to blame.”

The wrecked bark became an immediate tourist attraction. The day after the ship ran ashore the Oregon Journal reported that the wreck “proved a strong attraction…and in spite of the gale that was raging scores flocked to the scene of the disaster.” They noted that the Astoria & Columbia River Railroad was already planning to run excursion trains to the site.
Although the ship has been broken up by wave, wind, and sand over the years, the wreck of the Peter Iredale continues to be a popular tourist attraction. It is the most accessible shipwreck of the Pacific Northwest graveyard. Undoubtedly, my favorite attraction. Perhaps, knowing that in a few years all that will remain of Peter Iredale are the photos and memories, I returned to the same spot a few times during my visit to the park to watch the sunset.

From Coast to Coast

One thought on “Fort Stevens: Camping, Hiking, and History on the Oregon Shores”